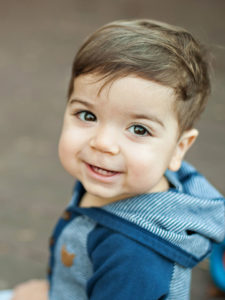 James Giovan is a fighter. In his short 15 months of life he has become known for being an old soul, a grumpy grandpa, and the boy with the most wonderfully warm smile. James has shown inspiring resilience in the face of his CHD diagnosis. Today he is growing, healing, developing his beautiful personality, and he has the potential to grow up to change the world.

James was born with Shone’s Syndrome, which is a condition that describes a combination of cardiac defects. James’ diagnosis was determined in utero, during the anatomy scan at the 20-week checkup. The doctor said she noticed a blockage of blood flow as it left his heart. Initially, the plan was to take the safe route, go down a single ventricle surgical path that would leave James with half of his heart pumping blood for his entire body. This meant that his first surgery would take place when James was five days old and the second one when he was five months old.

After the first two successful surgeries, diagnostic imaging showed that his left side had grown and his team of doctors called James’ parents to let them know they were going to go forward with the reversal; a two-ventricle repair. This meant that he would have his whole heart working to pump his blood rather than half of his heart. “That was always the greatest hope,” commented James’ mother, Monica. “It is a miracle for our family, and a testament to what James’ exceptional medical team accomplished.”

James has a long line of broken hearts among the nurses in the PCICU and the step-down unit at Duke University Hospital. James’ story cannot be told without the most heartfelt commendation to the Pediatric Cardiology team at Duke. From the first surgery, his brilliant team adjusted the repairs in order to promote his chances of growing, and it worked. James received the highest standard of care in and outpatient…something the family is beyond grateful for.